The land for the Children’s Playing Field was given to the village by Henry Higgins, who lived at Roualeyn during the early part of the 20th century. Mr. Higgins is buried in the church yard of St. Mary’s church and is still remembered for his kindness to children.

In 1975, because the Community Council could not afford to replace outdated and unsafe equipment, a public meeting decided to transfer ownership of the field to the Borough Council. 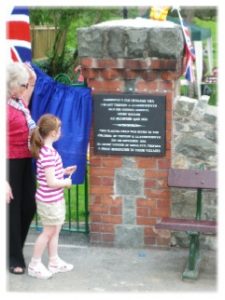 You can see a copy of the Minutes recording the meeting here. The Trefriw Children’s Playing Field Trust, with a board of local managing trustees, was registered with the Charity Commision and still manages the park.

In February 2009 work began on the Upper Conwy Valley Flood Defence Scheme and the park was cut in two by the flood defences. After the flood works, because of the reduced size of the field, some of the play equipment was placed on part of Trefriw Recreation Ground so that the children could have more space to play.  As a result, the old gate that used to lead to the Recreation Ground now opens into the Play Park.

In 2011, at the re-opening of the Play Park after the flood defence works, a commemorative plaque was unveiled to celebrate Henry Higgins’ original gift. The plaque was fixed to one of the gateposts at the former entrance to Trefriw Recreation Ground.